[Author‘s Note: If you have clicked on this link, then you are probably a big ol’ nerd. I LIKE YOU ALREADY!]

Why should I care about “redistricting”?

Well, if you have opinions about ANYTHING, then you probably want to choose who makes the laws that affect your life.

You would think so, wouldn’t you? The truth, however, is that North Carolina is an oligarchy disguised as a representative democracy.

The tool that politicians use to create the illusion that they enjoy majority support is commonly known as gerrymandering.

Gerrymandering is the drawing of electoral district lines in such a way that it discriminates against one political party and gives an advantage to the opposing party.   The party drawing the map can design the districts so that their party will almost always win, even if fewer people vote for them.

What’s up in North Carolina?

North Carolina has had THE MOST gerrymandering cases in the country!  This is all thanks to a private consultant who was sent to North Carolina from an out-of-state think tank who used sophisticated software to draw maps that would ensure his client stayed in power. [UPDATE: They hired him AGAIN! ]  WANT TO KNOW MORE?

If the answer is “yes”, then you are in the right place.   This is a list of links and references so that when my nerdy friends bug me about wanting to know more about redistricting, I can just send them this link.  YOU’RE WELCOME, my nerdy peeps.

What is this “redistricting” of which you speak?

Every 10 years, congressional districts are redrawn in connection with the US Census.  In North Carolina, the North Carolina General Assembly (NCGA) also draws its State Senate and State House districts at the same time.

The process for drawing districts varies from state to state – almost half of the states have some sort of redistricting commission, while in others the districts are drawn by the state legislature and subject to veto by the governor. North Carolina is one of a handful of states in which the state legislature solely controls redistricting – the district maps are not subject to the governor’s veto and there is no redistricting commission.   But enough about that –  YOU ARE HERE FOR THE LINKS, RIGHT?

Check out this great  Redistricting Blog by Loyola Law School professor Justin Levitt for a great overview of redistricting, as well as blog posts about current issues.

The Brennan Center for Justice section on redistricting has a great overview, and all the latest information on ongoing legal cases (plus links to key filings).

The “Citizen’s Guide to Redistricting” put out by the Brennan Center for Justice has a good overview of redistricting; however, note that it is from 2010 and the sections on the Voting Rights Act are no longer accurate because of more recent court cases.

See how other states do it here and here.

Amaze your friends!  Use terms from this Redistricting Glossary: http://www.fairvote.org/redistricting#redistricting_glossary

This Election Law blog by Election Law Professor Rick Hasen covers all voting rights issues, including redistricting – sign up for the email news letter and impress your friends by being the first to hear about exciting developments!

Redistricting reform is the new “sexy” – even Teen Vogue is writing (surprising good) articles like “Everything you Need to Know about Gerrymandering“.

For a readable overview of the legal framework by a local NC attorney, read this  Series of Blog Posts on Gerrymandering on Amy Worley’s Blog .

You can find links to the NC maps, and other related information on the NC Legislature website.

More redistricting resources are available on the “National Conference of State Legislatures” page.

For a great overview of the history of redistricting in North Carolina and applicable law, read this illuminating law review article, “Race as a Tool in the Struggle for Political Mastery: North Carolina’s ‘Redemption’ Revisited 1870-1905 and 2011-2013“. It is really good.

For more on the out-of-state private consultant sent to North Carolina by an outside think tank who drew the 2011 maps and who has cost North Carolina taxpayers $$MILLIONS of dollars defending the gerrymandered districts in court, see The Atlantic’s “The League of Dangerous Mapmakers” and  David Daley’s book “Ratf**ked”.

The Constitution Project has a nice short film on the “One Person, One Vote” reapportionment standard, starting with Baker v. Carr in 1962 and Reynolds v. Sims in 1964 : http://www.theconstitutionproject.com/portfolio/one-person-one-vote/

Common Cause is an organization dedicated to democracy that advocates for redistricting reform, and has a lobbying effort in North Carolina.

For my summaries on Covington and Harris and the story behind them, see https://hyperblogic.org/2017/02/13/how-many-lawsuits-does-it-take/

But what do you REALLY want?

Yeah, you know what I am talking about: a test for PARTISAN GERRYMANDERING.

Racial gerrymandering and partisan gerrymandering have historically been treated differently by the courts – but the function of each of them is essentially the same: they are both tools used by the politicians in power to keep their power and to dilute the power of other groups of people.

The arguments made in the consolidated LWV/ CC case are summarized in this  US District Court’s Memorandum.  Specifically, they argue that “the Plan violates three constitutional provisions:

In light of these NC cases, it is worth noting the Wisconsin partisan gerrymandering case, Whitford v. Gill, which has been appealed to SCOTUS.  In Whitford, a three judge panel ruled that Wisconsin’s districts were unconstitutional based because of PARTISAN gerrymandering, stating the “First Amendment and the Equal Protection Clause protect a citizen against state discrimination as to the weight of his or her vote when that discrimination is based on the political preferences of the voter.”

See this Brennan Center article on the Whitford case: http://www.brennancenter.org/blog/wisconsin-has-taken-its-partisan-gerrymandering-case-us-supreme-court-heres-what-happens-next

Meet the man who may end gerrymandering: Bill Whitford, the plaintiff in Whitford v. Gill in this article by my BFF and the author of “Ratf**ked“, David Daley (ok, he is not really my BFF, but I did sit next to him at a redistricting conference once.): http://www.salon.com/2017/03/26/meet-the-man-who-may-end-gerrymandering-a-retired-wisconsin-law-professors-supreme-court-case-could-save-democracy/ 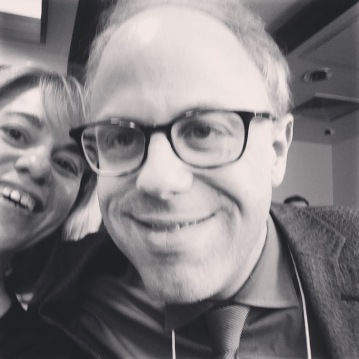 Still not enough?  You can read more about Whitford from the Campaign Legal Center , you saucy devil.

Did you know?  Other states have had constitutional amendments on redistricting.  One example is the Fair Districts Amendment: “Legislative districts or districting plans shall not intentionally or unduly favor or disfavor any political party. Within twelve months of ratification, all federal and state district lines shall be redrawn to conform hereto.” https://fixitamerica.org/help-us-pass-the-amendment

What Rhymes with “Gerrymander”?

Not much.  But if you need a chant for a #FairDistricts rally, you can try one of the following (hat tip to Jennifer Bremer, who I suspect is actually a Time Lord as she is absolutely everywhere and can do everything):

2) Gerrymanders rob our voice, give the voters back our choice;

3) Why is our state gerrymandered, we demand a higher standard;

BUT WAIT!  I want to have even more fun with redistricting!

Check out these printable signs, and decide what YOU think NC’s districts look like. 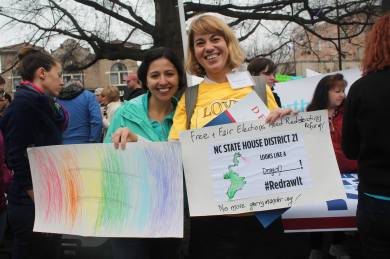 Are you into double-dutch?  instead of using that old “Cinderella” rhyme, try this next time you jump rope:

How many lawsuits will it take?