A Brief History of America.

I’m going to tell you a story.

The right to vote is the most fundamental right because every issue that people care about – local, national, world – is affected by the actions of elected politicians.

The right to vote has never been freely given – it has always had to be demanded.  Part of this story is a pattern.  Every time a new group has gotten the right to vote, there has been pushback.  Politicians have pushed back every time, to try to limit that right to vote so that they can keep the narrowly defined electorate that elected them. 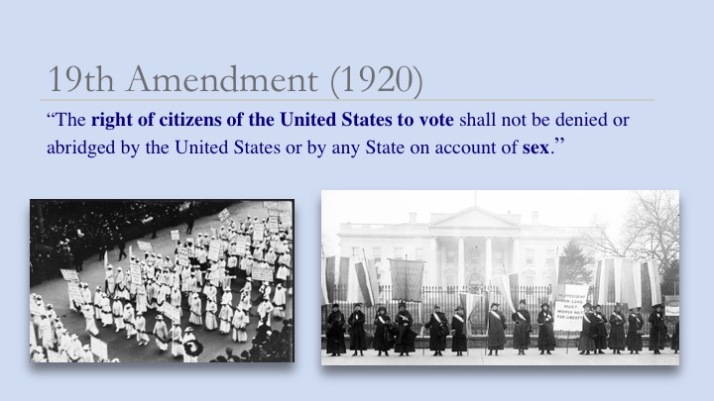 It wasn’t until 1920,  50 years later, before women could vote.   72 years after Seneca Falls convention for Women’s rights. 72 years!  It was only after suffragettes stood outside the White House for 8 hours a day, 6 days a week, for 2 and 1/2 years in silence, and after 33 suffragists were arrested, beaten and tortured in what became know as the “Night of Terror” that women got the right to vote. 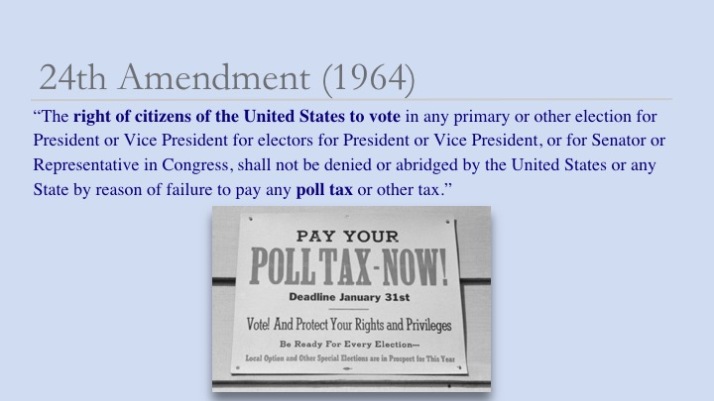 Up until 1964, if you could not afford to pay a poll tax, you could be denied the right to vote.  The 24th amendment prohibited Poll taxes in federal elections, but Southern states still had poll taxes for state elections. 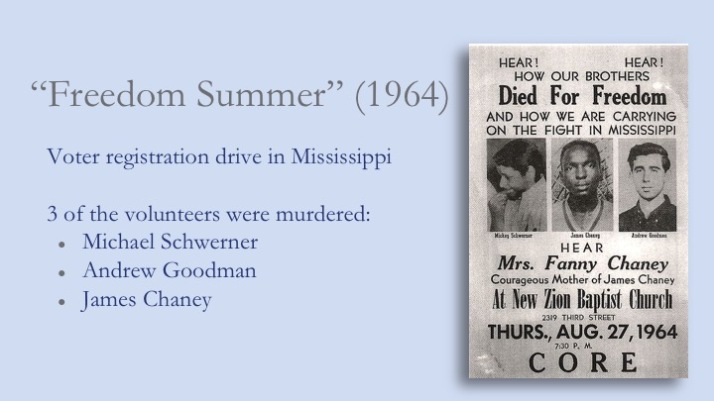 Almost 100 years after the end of the civil war, most African Americans in Southern States still couldn’t vote.

In Mississippi in the early 60s, fewer than 7% of eligible African Americans were registered to vote.

State Legislatures disenfranchised black voters by passing state constitutions, amendments and other laws with neutral sounding language that made it harder to register to vote:

Freedom Summer was a 1964 voter registration drive aimed at increasing black voter registration in Mississippi.  The KKK and local authorities attacked the activists.  Some of the attacks were violent and at least three people were murdered: Michael Schwerner, Andrew Goodman, James Chaney.

One Sunday the next year, 1965,  was the march for Voting Rights in Selma, Alabama.  Activists planned to deliver a petition demanding “the right to vote” at the state capital. As they tried to march across the bridge out of Selma, lawmen attacked them.  Many were seriously hurt, including future Member of Congress John Lewis, who was beaten so badly by Alabama state troopers that they fractured his skull.

Pictures of “Bloody Sunday” caused international outrage, and pressured President Johnson to  call for comprehensive voting rights for all Americans one week later.  The Voting Rights Act of 1965 (the “VRA”) was enacted a few months later.

The Voting Rights Act of 1965 (the “VRA”) sought to deliver on the promise of the 15th amendment.

The VRA had two major components:  Section 2 prohibited voting practices that restricted minority voting rights. Section 5 required areas with a history of racial discrimination to get pre-clearance before enacting any voting changes. 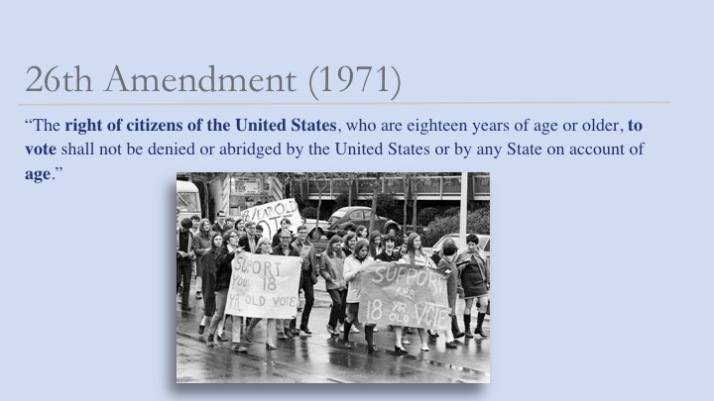 But even with all of these changes, young people still couldn’t vote.

During much of the Vietnam war, the young people who were being sent to fight and die could not vote for the leaders who were sending them there. One of the motos of the youth movement in the 60s was “Old enough to fight, old enough to vote”.  This changed with the ratification of the 26th Amendment in 1971.

By 2008, all these changes were working and people were voting in great numbers.  There was historic voter turn out in North Carolina.

In 2008 African Americans registered and voted at a higher rate than whites for the first time in North Carolina history.  America’s first African American president won because of the youth vote.

I wish this was the end of the story.  But it isn’t.

Again, there was pushback.  In response to 2008 election,  National groups launched a project “to solidify conservative policy making at the State level and maintain a Republican stronghold House of representatives for the next decade.”

They would do this by controlling WHO would draw the voting district lines after the next census.  They called it “Project RedMap.”

To explain their plan, we are going to have to talk about GERRYMANDERING.

Each state draws its own district lines – and the laws in each state governing how the voting districts are drawn are different.  When they redraw the lines, it is called redistricting.

North Carolina draws its State Senate and State House districts at the same time – the NCGA draws the voting maps  and the governor cannot veto them.

Gerrymandering is intentionally manipulating voting maps to create an advantage for a political party or group, and with “big data” and sophisticated software, this manipulation can be done very precisely.

After 2008, out-of-state groups  poured money into states where the state legislature have “primary control” over the redistricting process, like NC.

In 2011, the NC state legislature (the NC General Assembly or “NCGA”) drew some of the most gerrymandered electoral districts in the country  – both for themselves, and NC’s US Congress seats.

The VRA had been working.  For example, in North Carolina African American voter registration surged and North Carolina emerged as a swing state in national elections.

There was pushback.  Shelby County, Alabama –  a couple counties away from Selma – had been a covered jurisdiction under the VRA, and it brought suit to overturn a key component of the VRA.

In 2013, the US Supreme Court ruled in a 5-4 decision along ideological lines to overturn the formula used to determine “pre-clearance” under the Voting Rights Act in the Shelby Co. vs Holder case.  Chief Justice Roberts said that America had “changed”.

When the “Shelby” decision was announced, US Representative John Lewis, who was beaten almost to death for marching for the right to vote in Selma, said, “These [five justices] were never denied the right to participate in the democratic process. They were never beaten, jailed,  . . . No one they knew died simply trying to register to vote.”

The same day that “Shelby” was announced in 2013, an NC Lawmaker said, “now we can go with the full bill.” A voting bill was already drafted, and waiting.

Within DAYS, the NC lawmakers passed a Voter ID law that The Nation called the “country’s worst anti-voting law,”  HB 589.  This voting law attacked North Carolina’s access to voting in several ways, including:

The types of ID’s that were allowed for voting did NOT include Student IDs OR Government Employee IDs.

However, no lawsuit was brought on that basis because state laws that discriminate based on GENDER are NOT subject to “strict scrutiny” in judicial review of state laws under 14th amendment “Equal Protection” evaluation.

Note –> We never passed the Equal Rights Amendment. The ERA died right here in NC when the NCGA refused to ratify it.

Because NC’s 2013 “Voter ID” law did not allow Student IDs, mostly did not allow out-of state Driver’s licenses, and ended pre-registration – young people were affected at a higher rate than voters over 30.

In 2016, a federal Court overturned the law. They found emails that showed that lawmakers had intended to discriminate against “African Americans with almost surgical precision”.   The NC legislature appealed the ruling.

In 2016 – 2017, courts also struck down all 3 voting maps drawn by the NCGA in 2011 as unconstitutional Racial gerrymanders in violation of the Equal Protection Clause.  The NCGA has continued to pushback by appealing the ruling, and drawing other gerrymandered voting maps that even now being challenged in court.

In May 2017, the US Supreme Court declined to hear the appeal of the case overturning NC’s “Voter ID” law.   The same day the Supreme Court announced that it wouldn’t take up the appeal seeking to reinstate the discriminatory voter-ID law, NC lawmakers announced that they intend to pass a NEW VOTER ID law to restrict voter access.

NC lawmakers have now passed  a proposed “Constitutional Amendment” to require a yet-to-be determined type of “Photo ID” to vote in person for all future elections. The proposed amendment to the NC Constitution would give these same lawmakers the ability to  decide what kinds of ID are allowed when they come back into session in November.

By choosing the types of “Photo IDs” that will be required to vote,  lawmakers elected from racially gerrymandered voting districts will be able to choose the demographics of voters for the 2020 election.

A new census will be done in 2020, and the lawmakers who control the NCGA in 2020 will get to draw the voting district Maps almost however they want after the 2020 census.

The new law changed the number of members of  the NC State Board to eight (8), and each County Board of Elections to 4 members.  The Board members are evenly divided between two political parties (which means more deadlock).   It also takes away the ability of Secretary of State to investigate and levy fines for ethics violations.

The NCGA has done several versions of this change to the Board of Elections, each of which has been challenged and either entirely or partially overturned by courts.  The first version of the change was struck down by state courts, lawmakers made some changes to the judiciary, then came back with a slightly different version.  A 9th member has been appointed to the state Board of elections by court order.

NC Lawmakers keep loosing in court.  In an attempt to get more favorable judgements, the have made significant changes to the judiciary in NC.

They passed a law redistricting the two most populous counties, Wake and Mecklenburg. Previously, District Court judges in Wake and Mecklenburg were elected from the whole county.  This new law breaks these counties up into “districts” which, gives the NCGA the ability to draw voting districts in a way that suits them.

Changes to Wake county judges is particularly of concern, because Wake County Superior Court 3-judge panels are the venue to review challenges to NCGA actions and redistricting plans.  In fact, these lawmakers have a case pending in Wake county right now for violating the NC Constitution prohibition on mid-cycle redistricting of legislative districts.

The next chapter in this story will be written by you.  You will write it using your RIGHT TO VOTE. Your future is on the ballot this year in North Carolina.

YOU have been empowered by those who came before you to make your voice heard by registering to vote, and in November – VOTE!

Sept. 22, 2018,  L. Aylett Colston.  Earlier versions of the post were presented at “Uniting for our Future” on  July 14th, 2018 at The Enterprise Center in Winston-Salem, NC; the “Fight4Her” Summit  on August 11, 2018 in Chapel Hill, NC; and at the “Using your voice: Empowerment through Voting” workshop at the International Civil Rights Museum in Greensboro, NC, Sept 22, 2018.