Here is the lowdown on NC’s JUNE 7 special election: After a bit of legal wrangling, North Carolinians can VOTE for a State Supreme Court Justice in a contested NC 2nd seat election and candidates to represent NC in the US House of Representatives.  Get the 411 and get yourself to a polling place.

What’s up with the extra election?

The NC state legislature has been up to a bit o’ shenanigans and gotten some judicial smack down (to use the technical terms). Some gerrymandering of congressional districts here, and “retention election” protection from challenges for justices there . . . then some lawsuits  . .  the NC legislature’s mess got overturned, but not soon enough to deal with it in March . . . yadda yadda yadda . . . special election.  For more info, see links below .

What’s the deal with the State Supreme Court Justice situation?

The NC state legislature enacted a law providing that NC Supreme Court judges don’t really have to run for re-election, but it would look like an election if you weren’t paying attention.  They called it a “retention election” (is that even a thing?).  This new “retention election” provision was challenged in court and very narrowly overturned.

So, for whom should I vote for NC Supreme Court?

I don’t know any of them, but Sabra Jean Faires went to Davidson College (Steph Curry’s and my alma mater) so she is obviously very smart and talented. She also brought the lawsuit that forced the election.   Michael Morgan is an experienced trial judge (both district court and superior court) and I think having trial court experience brings perspective to the often more academic style of review of a state supreme court.   He has also been endorsed by IndyWeek. You can find out more about the 2016 judicial elections here.

The top 2 will be on the ballot in November.

Wait – didn’t I just vote in a primary in March?

Yes. But NC’s U.S. House primaries had to be moved  from March 15 to June 7 because a federal court held that two of NC’s congressional districts were racially gerrymandered and must be redrawn, and there was not enough time to change the ballots. With a low turn-out expected, your vote counts in determining who will be on the ballot for the US House of Representatives for North Carolina.

You can find out what district you are in and what you ballot will look like at ncvoter.org .

If I vote in this primary, will that get people to stop making fun of North Carolina?

Um . .  .  not by itself.  But I think we North Carolinians have learned the hard way that we need to pay close attention to local elections.  Let’s get involved, show our mettle and take charge.  WE can do this! 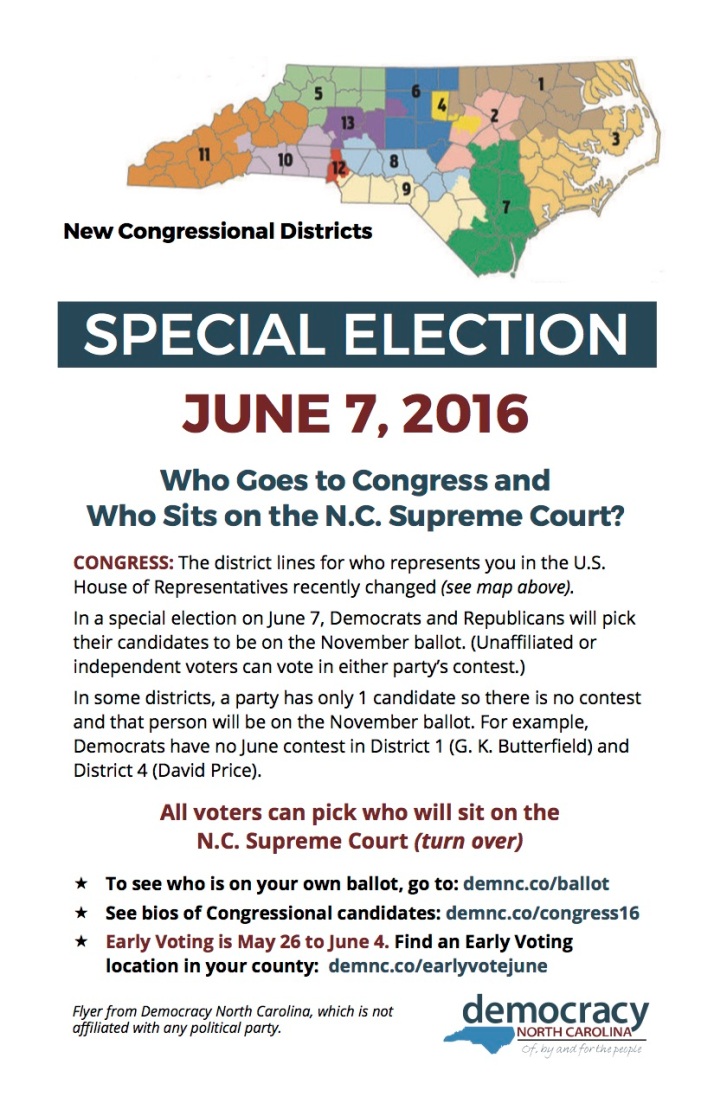 Battle for the NC Supreme Court

For more background on gerrymandering generally, see The League of Dangerous Map Makers  in no small part because of its awesome title.

One thought on “Once more into the voting booth, North Carolinians!”